With the release of the latest version 21.2 of the KeyHelp Server Control Panel, the recently released Debian 11 (codenamed "Bullseye") already gets support by KeyHelp. Further functions as well as optimisations of the new backup system and a new language are also part of the latest update.

If you want to install and run KeyHelp on a Debian 11 equipped system, this is possible by upgrading. For a smooth upgrade from Debian 10 to Debian 11, KeyHelp users will be provided with instructions and an upgrade script at https://www.keyhelp.de/en/help/#os-upgrades at the end of September.

The new backup system receives numerous improvements and bug fixes with this update. The overall stability of the system has been improved, the user interface optimised, the progress indicator and statistics features expanded and much more. Further improvements will be included in future updates.

Another new feature as a result of the update allows you to transfer settings from one server to another with just a few mouse clicks. This can be particularly helpful if you want to expand your KeyHelp infrastructure and put additional KeyHelp servers into service.

Finally, we are pleased to be able to offer KeyHelp in Chinese (Traditional Chinese) from now on. Our thanks go to the translator Wu Ru Kang.
As always, you can find an overview of all changes in the change log at https://www.keyhelp.de/en/changelog/ In addition, you have the opportunity to quickly and clearly inform yourself about the updates in the latest KeyHelp video. 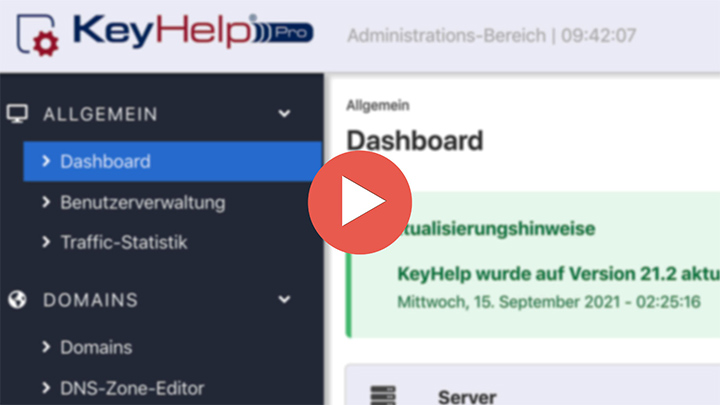